A vintage photograph of the single-door version of the late, lamented 1932 double-door General Electric Monitor Top refrigerator that stood in the kitchen of my country house. Image from Worthpoint.com.

For several years, about a decade ago, my husband and I owned a 1930s General Electric Monitor-Top refrigerator. You know the kind: an imposing white slab of enameled metal, straight out of a Hollywood movie, with a basket-like contraption on top that hummed like a hive of bees and cabriole legs. As far as kitchen appliances go, it was my pride and joy, an eBay purchase so heavy that the kitchen floor had to be stabilized before the  refrigerator could be brought into the house—through the combined efforts of four able-bodied men, as I recall. It also took up an amazing amount of square footage, as I recall. Still, the side-by-side doors opened and closed with a satisfying ka-chunk, followed by a metallic click, so you knew everything inside was going to stay perfectly cool. Unfortunately this hunk of American ingenuity died one excessively hot and humid summer and could not be revived, at least not on our budget, so we replaced it with an extremely boring but efficient modern model. I still mourn the GE’s absence, though presciently, for the purposes of this blog, I had the presence of mind to keep its original handy-hints cookery brochure.

"The Silent Hostess Treasure Book," a curious cookery brochure that once accompanied a 1932 General Electric refrigerator.

Entitled The Silent Hostess Treasure Book, the paper-back publication is a promotional giveaway intended to make the General Electric Monitor Top seem even more radiantly modern and efficient to beleaguered American housewives. As the introduction states, it is “arranged to assist you in making the greatest use of your General Electric Refrigerator.” Consequently the recipes in its pages—from the cannon ball cocktail to beets cut into heart shapes for a Valentine’s Day luncheon salad—are devised to spend some time in the refrigerator, either waiting to be cooked or congealing in its chilly depths, which seems rather nonsensical today, at least as a galvanizing selling point. Still, the assortment of hors d’oeuvre, main dishes, desserts, and the like must have caught my fancy, at least enough to retain the brochure as the old refrigerator went out the door to its landfill demise.

Over the week-end, as our daughter was preparing her pencils, notebooks, and other paraphernalia in anticipation of her first day back in elementary school, she asked to choose the cookery book for at least one blog post. And the book she selected was The Silent Hostess Treasure Book. She flipped through its pages, studying the garish, even lurid photographs with great intensity, considering which looked the most appetizing. Finally she pointed at one picture and said, “Make this one.”

Stuffed Eggplant, as pictured in "The Silent Hostess Treasure Book" (1932).

“This one” was Stuffed Eggplant. Frankly, I’ve never been fond of stuffed vegetables, having been plied with far too many stuffed bell peppers as a child, but the illustration was fancy enough to catch my eye: a baked eggplant shell mounded high with sautéed chopped eggplant flesh and mushrooms and picturesquely crisscrossed with pimiento trelliswork. We had numerous eggplants growing in the vegetable garden’s raised beds, my husband reminded me, and there’s nothing I like better than decorative garnishes. So off we went to the grocer to pick up a few missing ingredients, and upon our return, I set to work. Some flavor adjustments were made (and are noted below), given the bland promise of the recipe’s contents, and what was wrought was unexpectedly good. Not great but warm, filling, and delicious, far more flavorful than I expected it to be. And as you can see in the photograph below, I got all details right. Just don’t eat the eggplant vessel, only the filling.

Stuffed Eggplant, as prepared by The Aesthete Cooks; the platter is 1830s Old Paris Porcelain.

SERVES: Two (2), as a main course, with other side dishes; using two small eggplants for this recipe would certainly look better.

Dried thyme (not in original recipe)

Dried basil (not in original recipe)

Buttered breadcrumbs (about 1/4 cup, warmed in a skillet with a bit of unsalted butter until it is fully absorbed; I used panko crumbs)

1. Preheat oven to 400 degrees Fahrenheit. Cut slice from top of eggplant or cut in halves lengthwise; scoop out meat to within half an inch of outer skin. 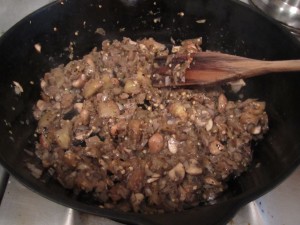 2. Chop mushrooms and eggplant coarsely and sauté in butter, with onions, for ten minutes.

3. Add ham and seasonings and continue to sauté for another minute.

4. Fill eggplant shell with the ham-mushroom-eggplant mixture (it will be heaping) and sprinkle top with buttered bread crumbs.

5. Bake until thoroughly heated and the breadcrumbs have turned golden brown.

6. Arrange thin strips of pimento crosswise on top and serve.